The Sabertooth Vampire. The
Sabertooth
Vampire.

Fan Art of the Sabertooth Vampire.

The best surprise that's come from making "Sabertooth Vampire" comics? The fan-art -- much of it textiles-based. Here's a sampling of the drawings, dolls, clothing, and needlepoint (among other things) that I've gotten from readers since starting the comic in January 2011. Thanks so much.

Mouse over the photos for artist details. 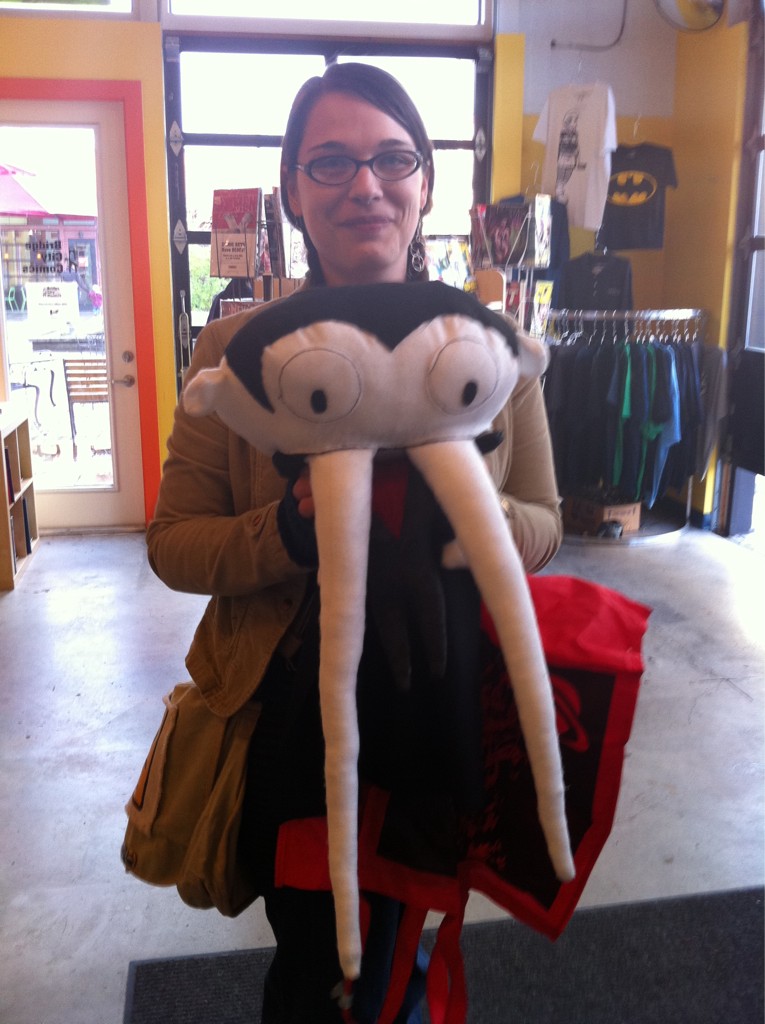 Bobby Roberts' awesome wife Bobbie Winchell (pictured) made this Sabertooth Vampire plushie in secret and presented it to me at our first signing party at Bridge City Comics in April 2011.
Artist Link 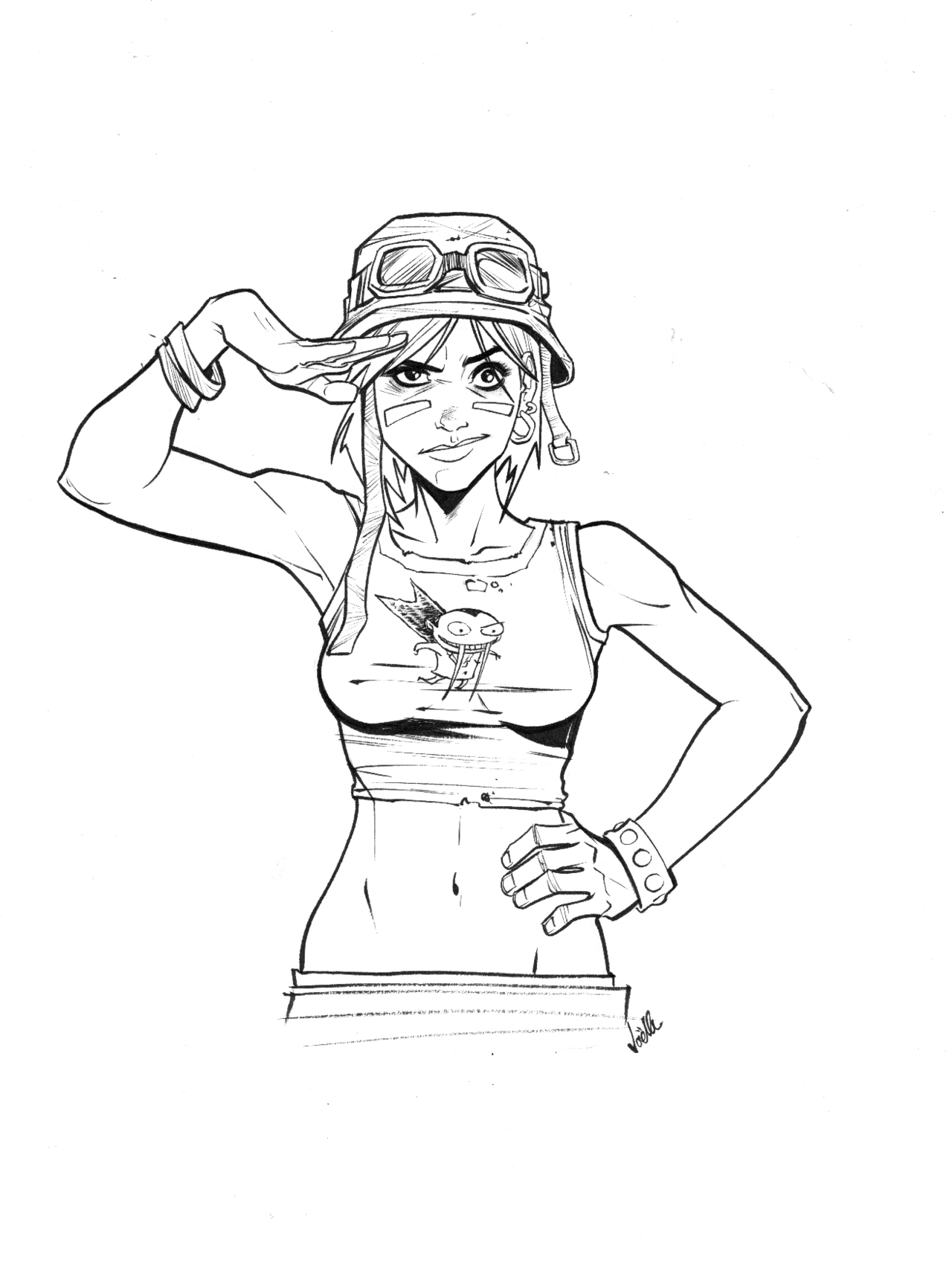 Mighty Joëlle Jones worked the Sabertooth Vampire into a warm-up sketch of Tank Girl a few years back, then very kindly gave me the original drawing. Dropped my jaw a good healthy distance. Do yourself a huge favor and check out Joëlle's ongoing series Lady Killer (which Bill Mudron and I celebrated with fan-art of our own).
Artist Link

From my friend and occasional collaborator Adrian J. Wallace: "The Sabertooth Vampire in Antarctica."
Artist Link

My friend and occasional collaborator Adrian J. Wallace works in animation, and he made this animated .gif of "House of the Sabertooth Vampire." (It got me thinking about how an animated short starring the little guy might work.)
Artist Link 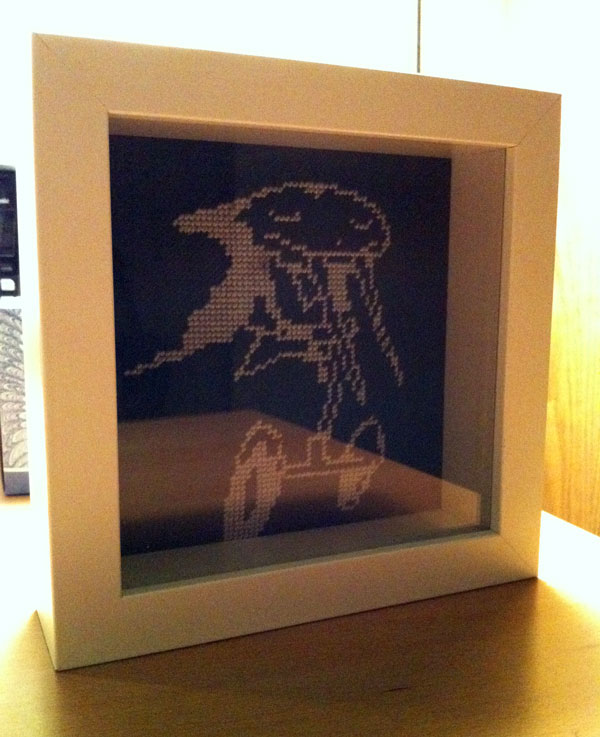 A framed cross-stitch Sabertooth Vampire from Steph Nova (@stephonova on Twitter). If he ever appears in an 8-bit video game, he'll look like this.
Artist Link 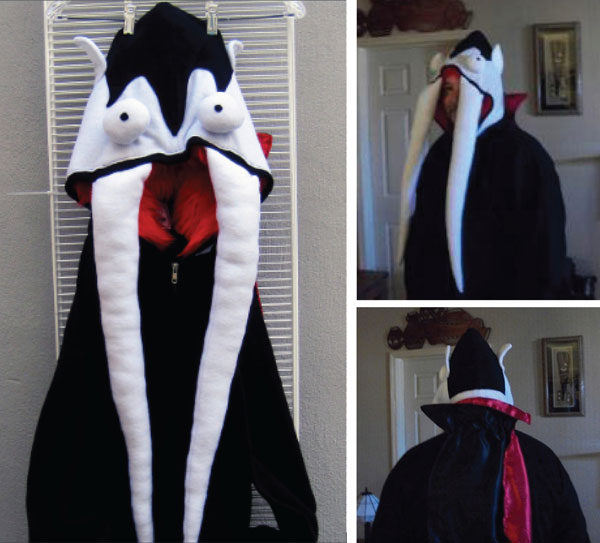 Check this out. Reader Joseph Vaughan (@DethMunky1978 on Twitter) commissioned Diane Koss of cutesybutnotcutesy.com to make two real-live versions of the "Sabertooth Vampire" hoodie that kicks off "Merchandising of the Sabertooth Vampire." He mailed me one of them. The cape is detachable. Incredible.
Artist Link 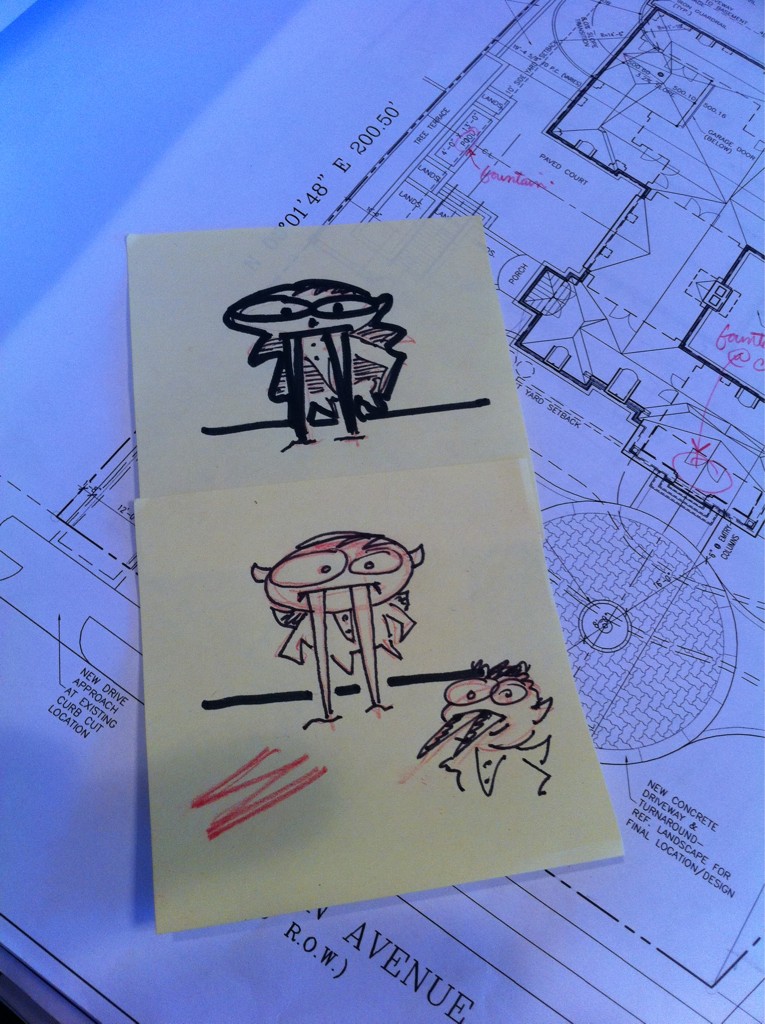 A graphic trio of Sabertooth Vampires atop some blueprints, by @Jayne_Statue.
Artist Link 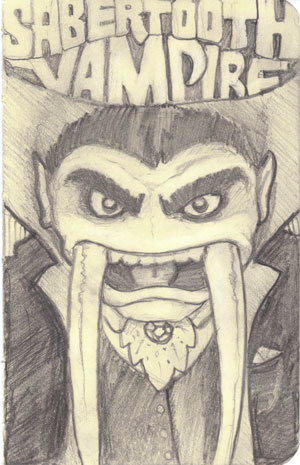 A ferocious specimen from Kyle Yount, proprietor and host of KaijuCast, a fantastic podcast dedicated to Godzilla and all his rubber-suited foes.
Artist Link 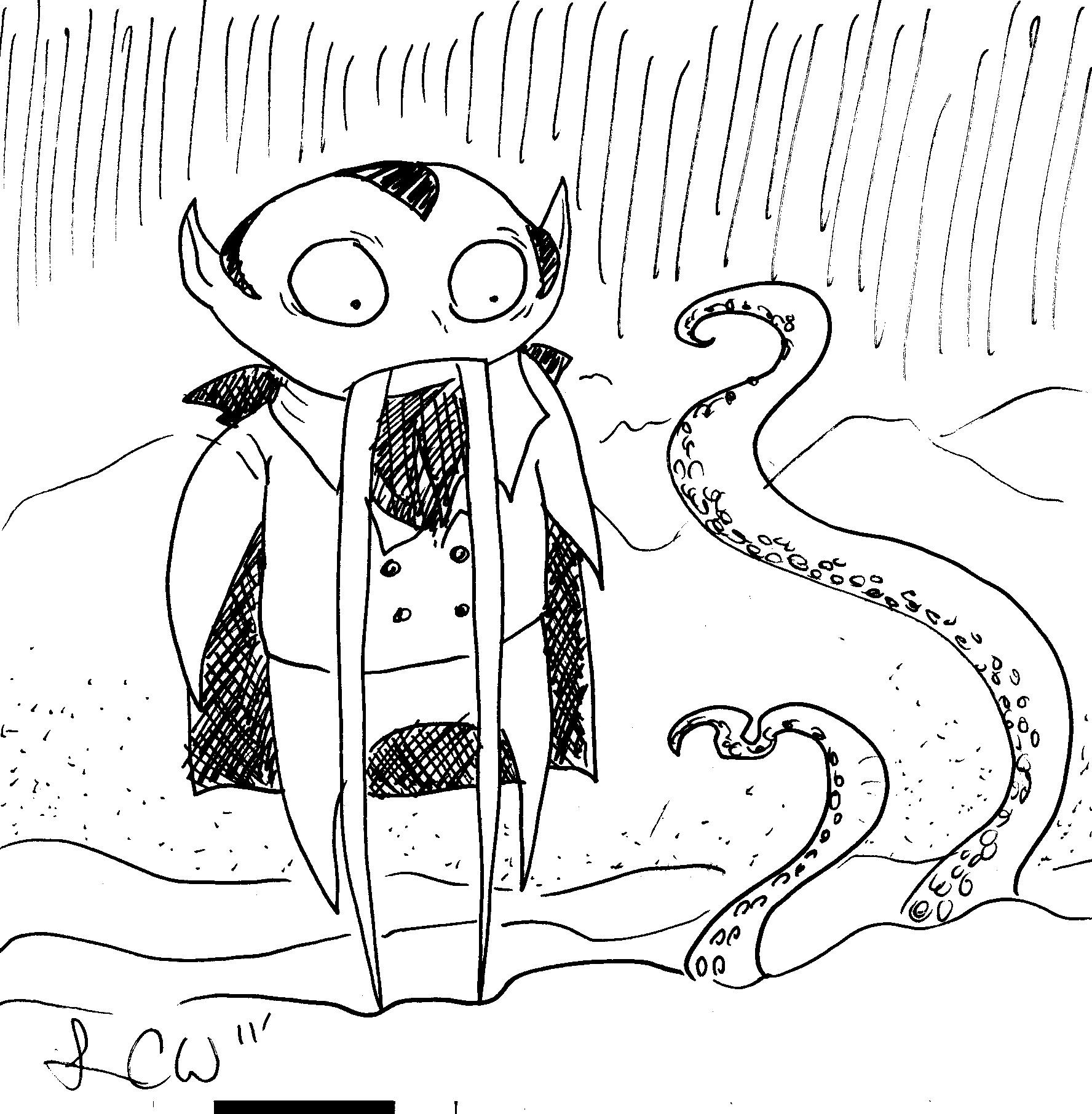 From Leia Weathington (@solmaru on Twitter), creator of comics series including Deep Engines and The Legend of Bold Riley. SV's full-sized adult body in this drawing kind of weirds me out. In a good way. It's extra-sad the way over-the-hill salesmen are sad.
Artist Link 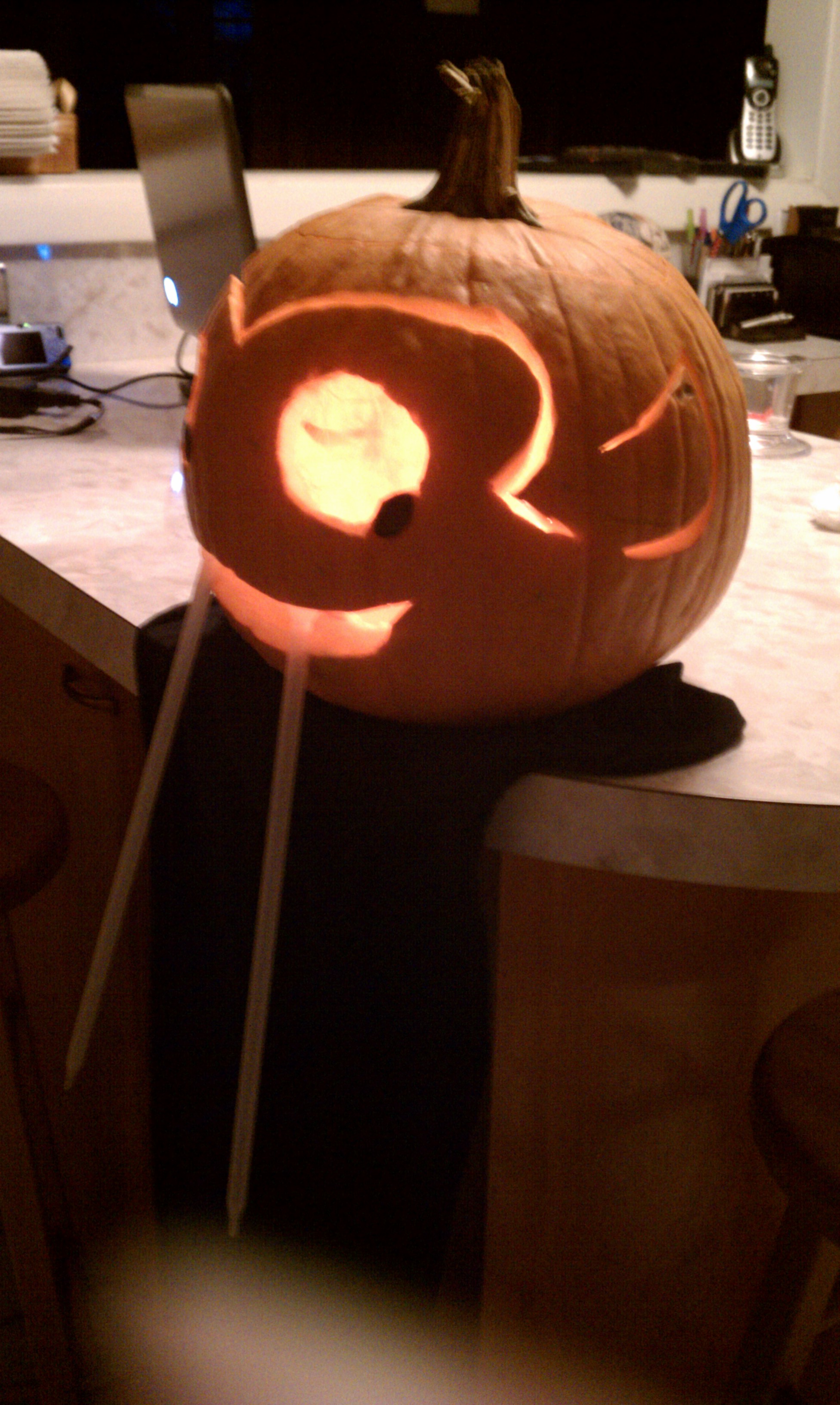 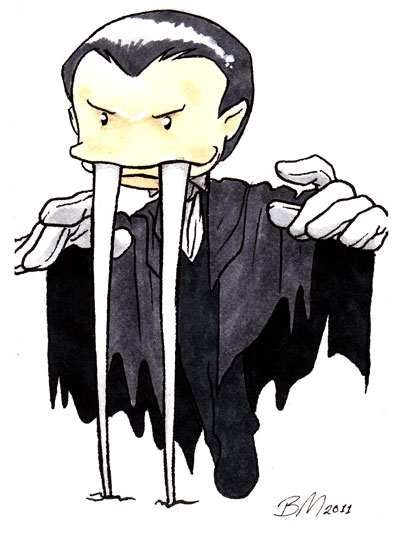 A wonderful piece from @GlazedMacGuffin, who created some jaw-dropping fan-art for our old podcast "Cort and Fatboy" back in the day.
Artist Link 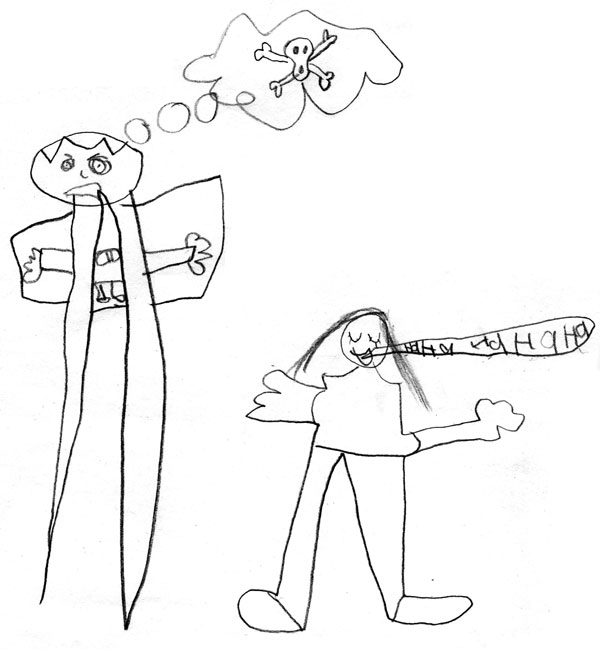 "The Sabretooth Vampire," as drawn by Maggie R. Dorr, age 7. I think she really boils the comic down to its humiliating essence, personally.
Artist Link 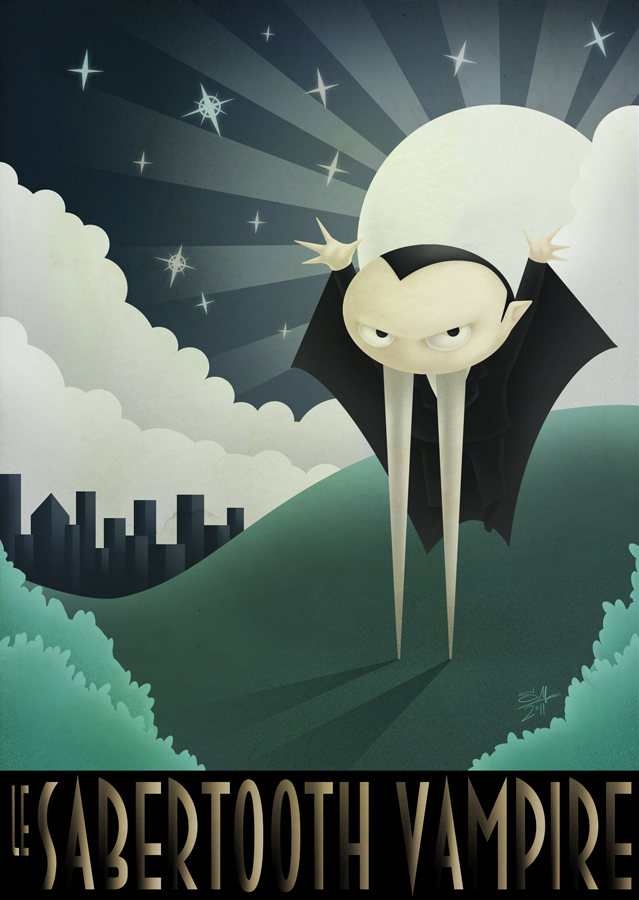 Colin turned up at the Vol. 2 book-signing party in October 2011 and relayed the terrible news that a computer crash had erased the high-rez files for the nouveaux S-Vamp found elsewhere in this gallery. "So I made you a second piece," Colin said, and handed me this.
Artist Link 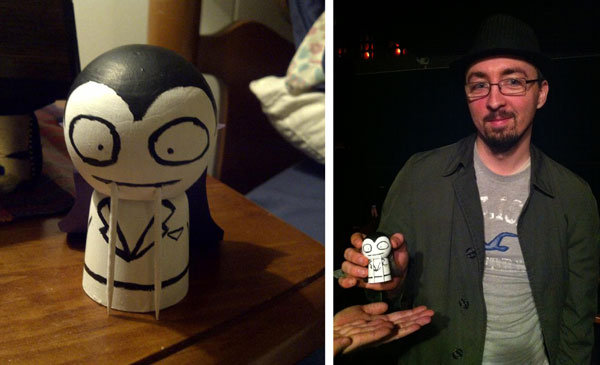 Reader Richard Lee Johnson (pictured) made this wooden Sabertooth Vampire using a myrtlewood base, a doll's head and a drill press. He handed it to me at our "Cort and Fatboy" screening of "The Thing."
Artist Link 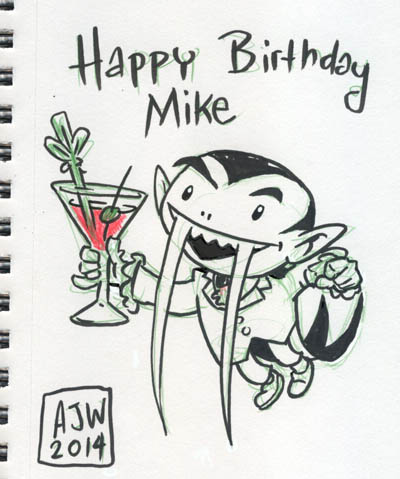 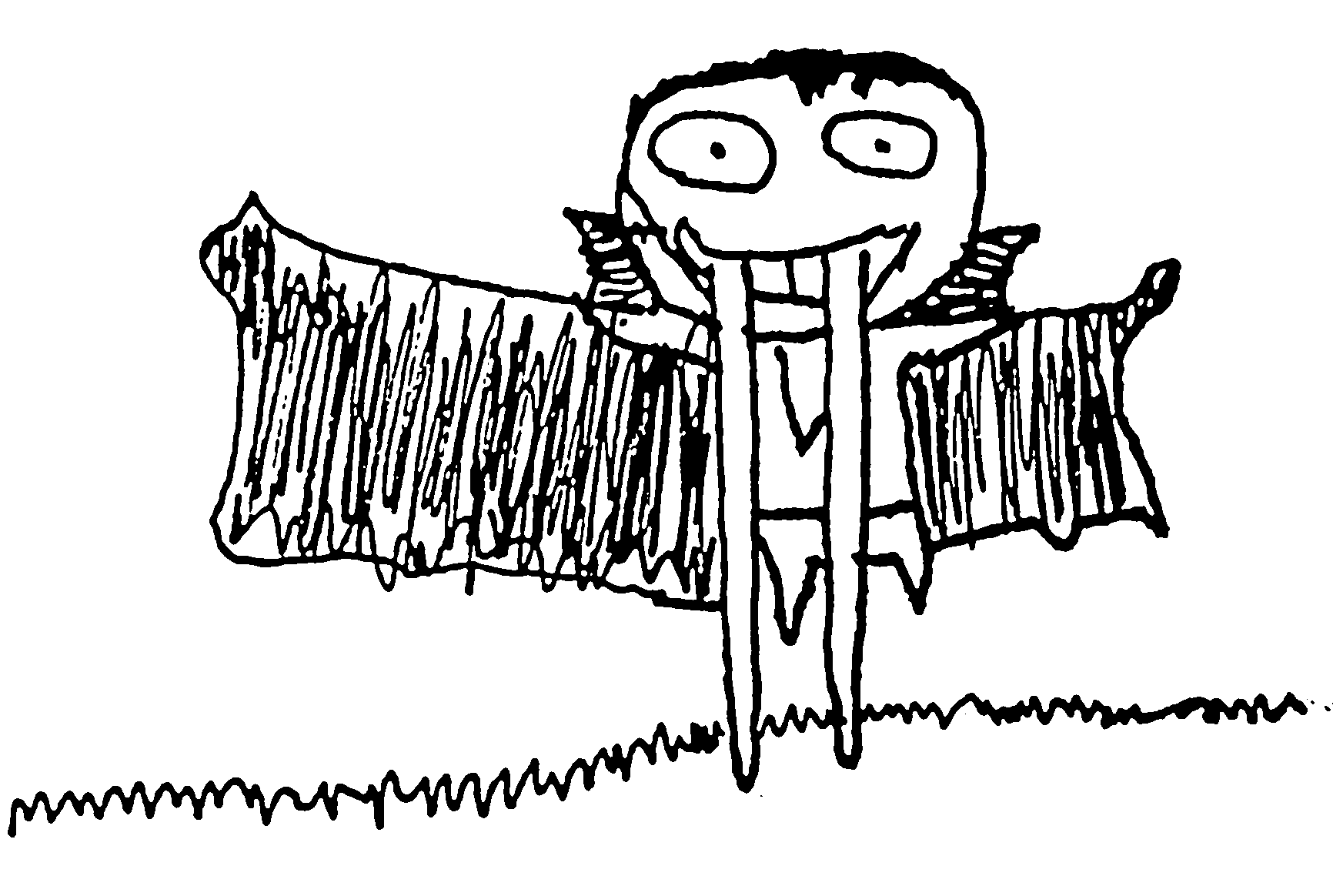 Here's one from @pyrosim of the "Nerd Talk" podcast. The longer half of SV's outspread cape should really have some stolen watches in it.
Artist Link 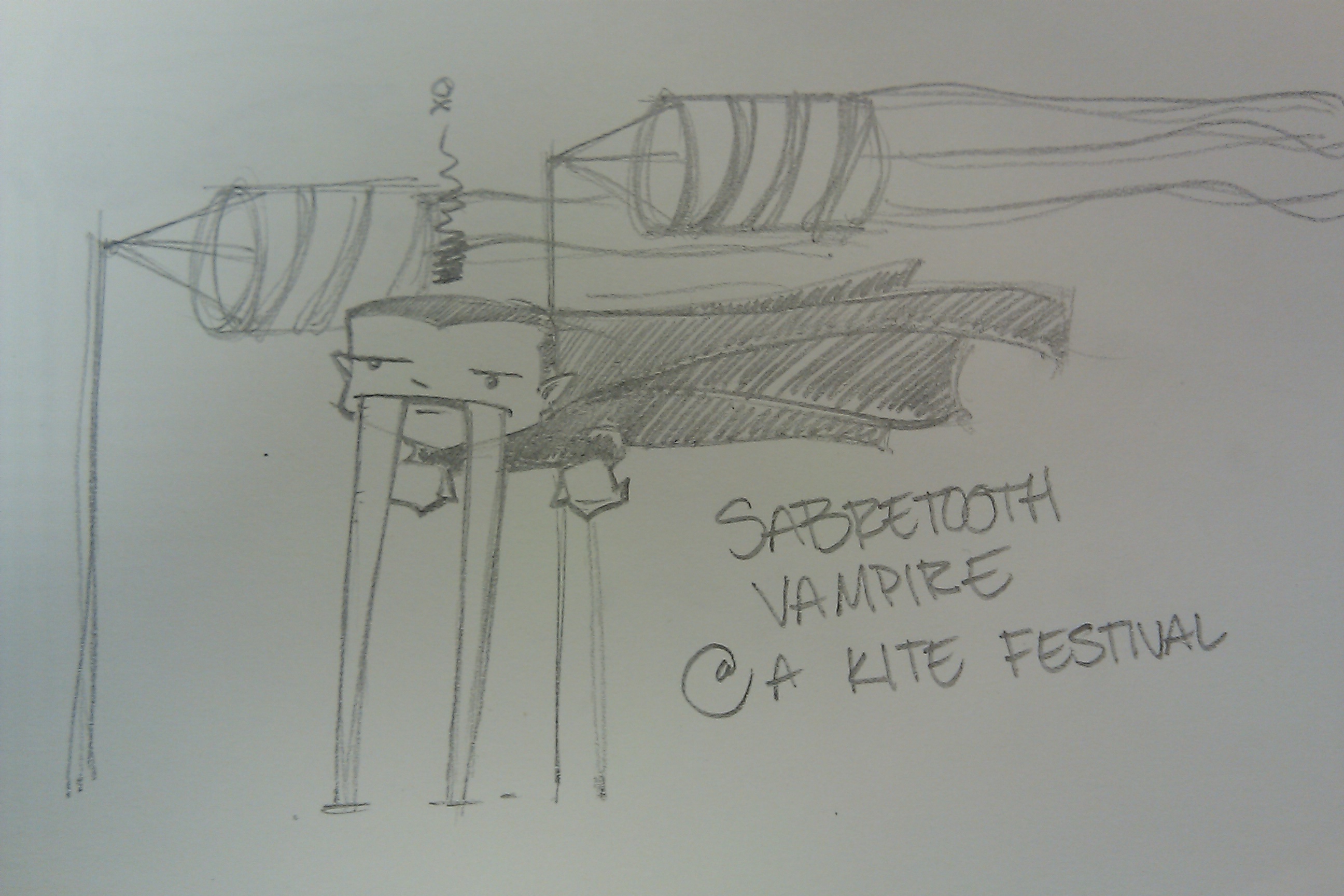 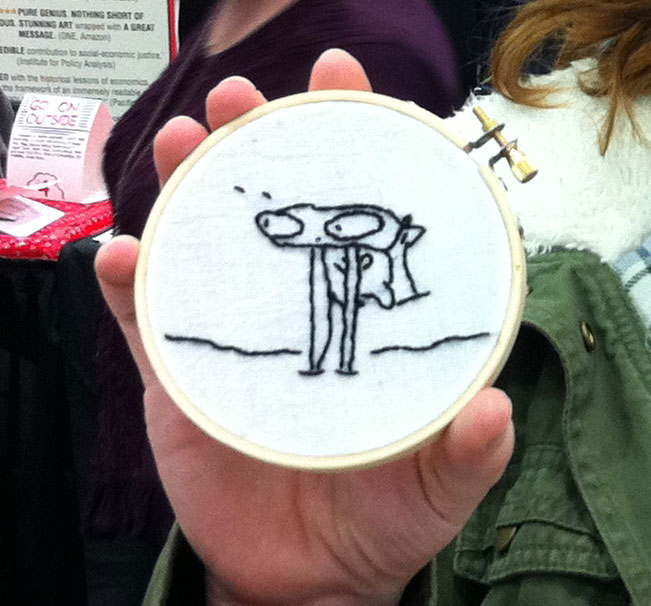 This lovely needlepoint was handed to be at the Stumptown Comics Fest by Tarehna.
Artist Link